Lofoten the holy grail of splitboarding

Since 2009, after spending a season in Alaska, Norway was on top of my wish list. According to many freeriders I spoke, these two mecca's have a comparable style fjords, mountains, and nature. The Lofoten in Norway are lying even 1500km more North than Valdez Alaska. The Lofoten snow-pack is more reliable than in the Alps; this is something that frequently occurs in a sea climate due to the constant temperatures and snow that falls with a higher degree of humidity and therefore adheres better to the steep slopes.

The Lofoten are becoming more familiar with the Swedes and the seasoned splitboarders and tour-skiers. Most peaks have around 700 altimeters from sea level, with a few exceptions that have just over 1000m. You can access many tours from the main road, for some peaks you have to take a boat or a ferry.

Irian van Helfteren and Jeroen Smallegange originally organized this trip. But after a heavy season for Irian, he shattered his heel into a few pieces on the landing of a corner-jump. Irian was getting patched up and needed a replacement guide for the trip.

Jeroen had been on the Lofoten for four times already and told me that the weather does not always coöperate in the Lofoten. But in the weeks before the trip, forecasts became better and better. The Lofoten received 40cm of fresh snow at sea level two days before we arrived. It turned out to be the most stable week of the season. We did not even have to drink it blue once in the Lofoten like they do in Alaska. 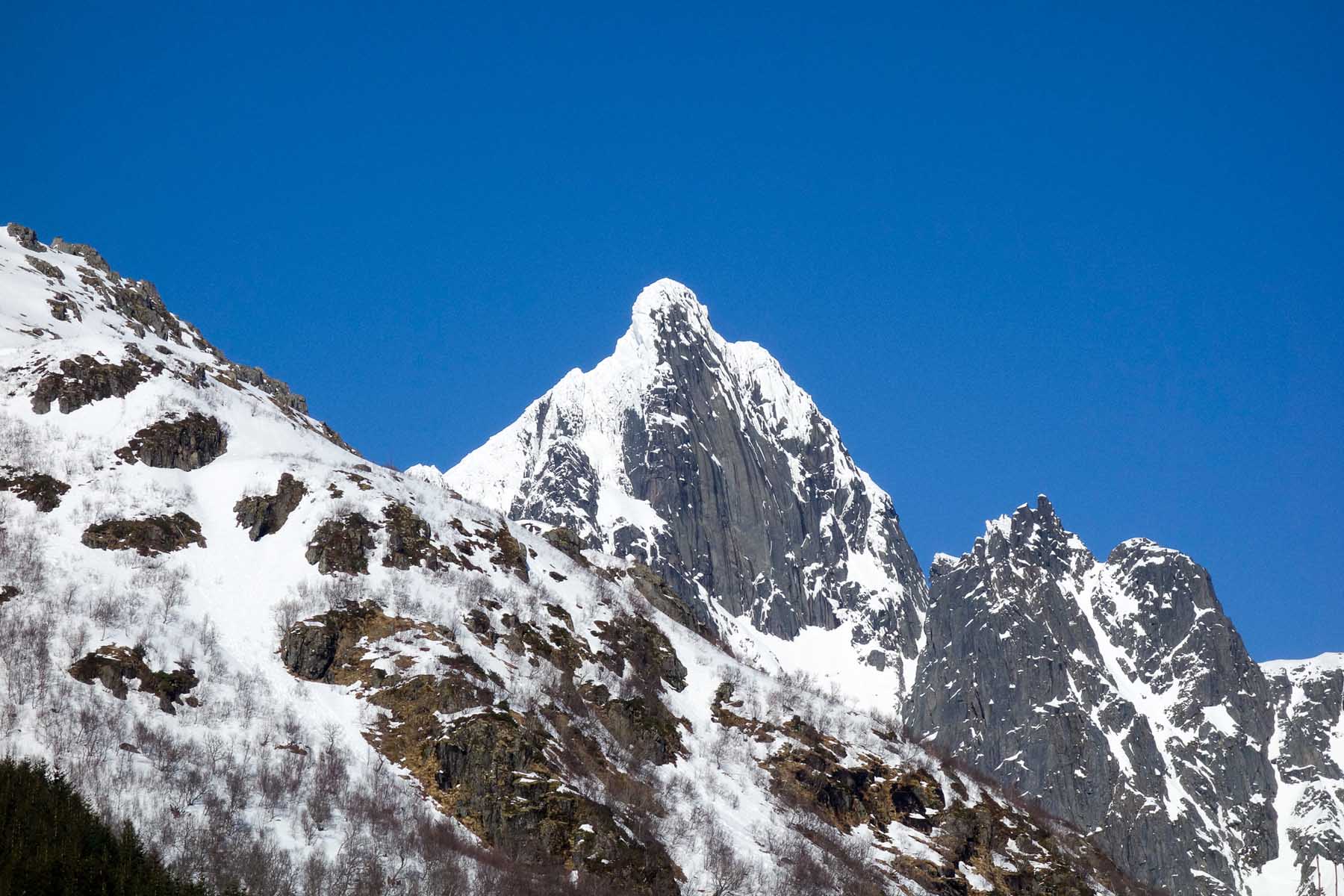 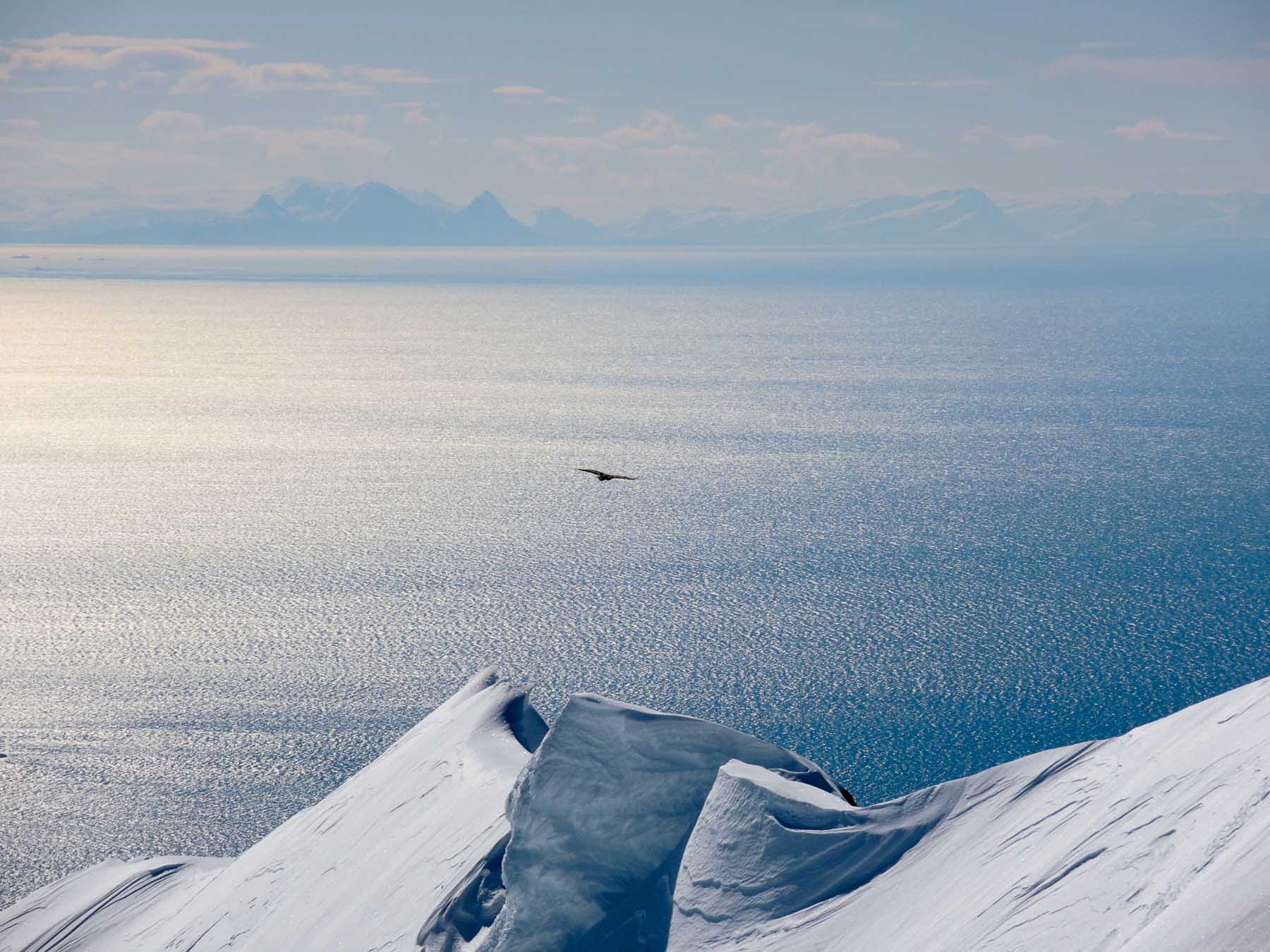 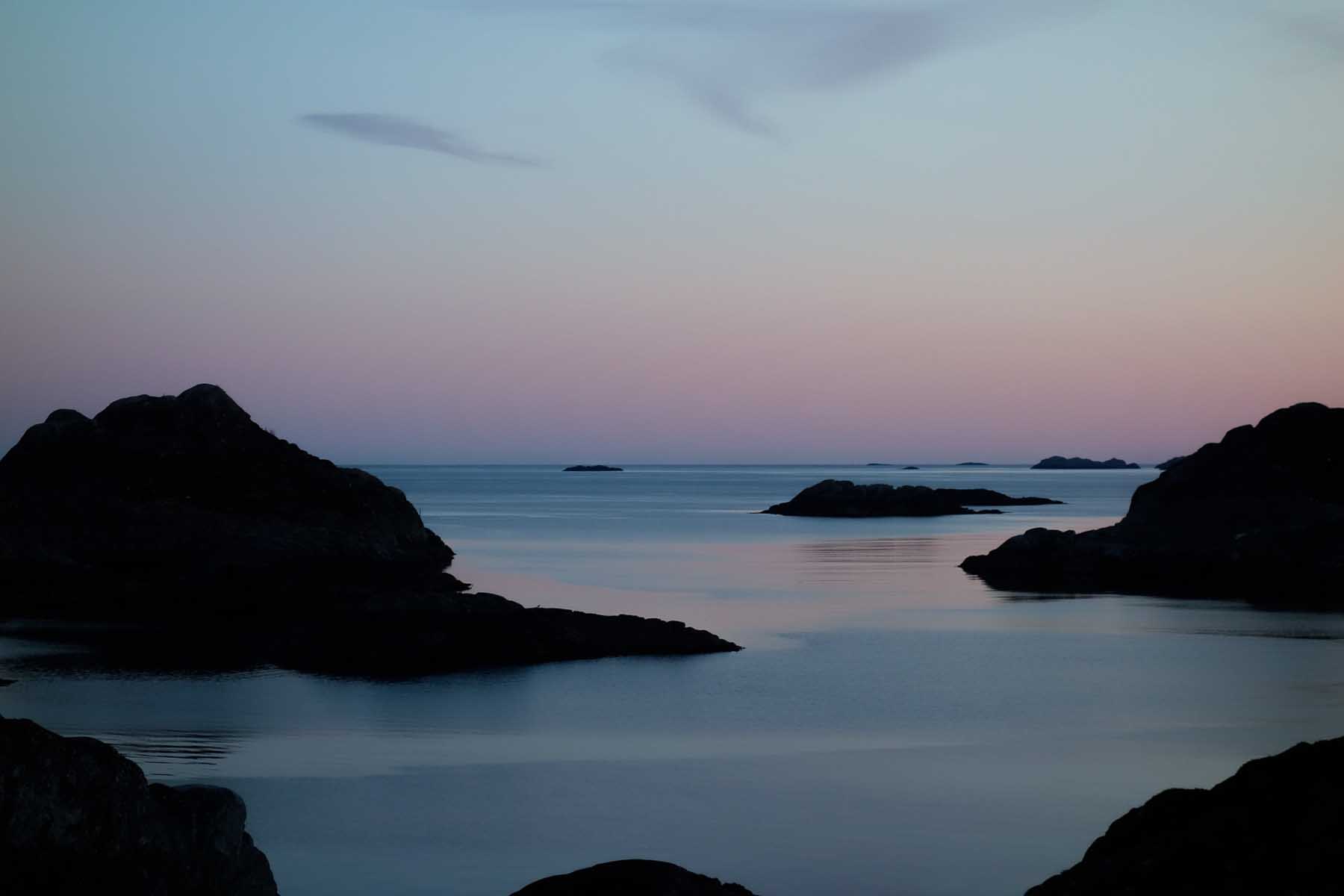 The experienced crew of regular Arlberg guests consisted of 9 energetic splitboarders, both Dutch and German and one brave skier. We knew exactly what expectation all the guys had, which was awesome. On Sunday at the end of April around 3 o'clock, we met at the Tromso airport. From where we drove three rental cars to Kabelvåg. Of course, there is always one piece of luggage that does not arrive, but we were lucky that Tim's missing board bag arrived after two hours of chatting about mountain-life under the joy a coffee. 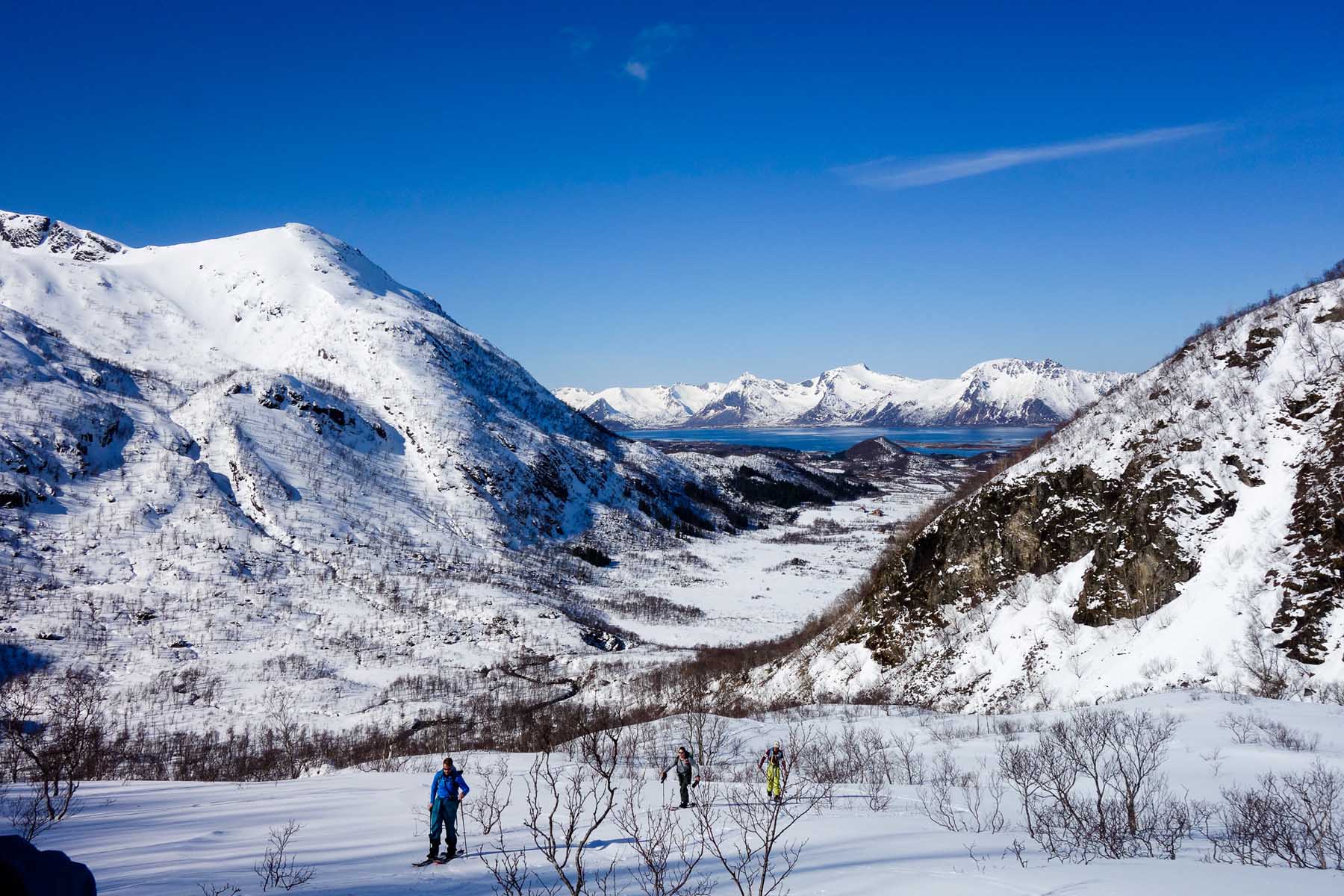 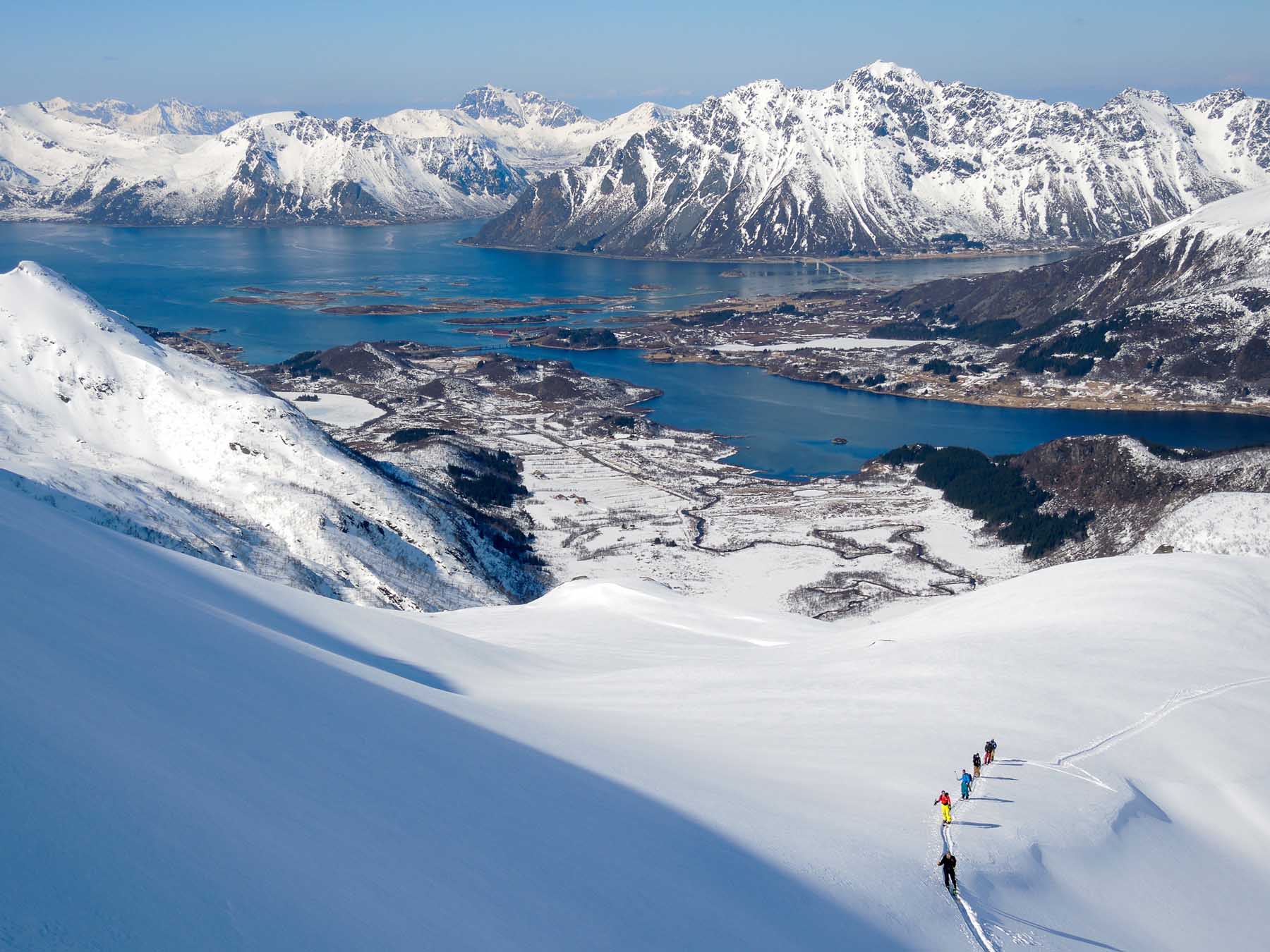 It was a 3 hours drive through the magical fjords and mountains full of fresh snow; we spotted a few natural avalanches of 1-2 days old and not a single ski-track. The temperature fluctuated around minus 8 degrees Celsius at sea level. We decided to eat traditional Norwegian codfish in a small restaurant in Svolvær, which was five Kilometers away from our accommodation in the harbor. Sea-food is the ideal power source for splitboard tours. We discovered the first world problem number 1 of the trip soon after the checkout: the Norwegian Ale beers are way too delicious, and for twelve bucks each, they are a little bit on the expensive side.

After having breakfast in our Norwegian fishermen's cottages at the port, we did a quick gear check and got on our way to the first tour of the week. The weather set the tone for the week; it was perfectly bluebird without a sigh of wind, which was promising for the snow. The plan was 700 Vertical meters with minimalistic equipment without crampons and an Ice-Pick. The tour goes to a summit called "Stortinden" at 731m west of KabelvӒg. The goal of Tour was to acclimatize, to experience the Norwegian beauty and to get to know each other.

The journey begins on a dirt road, which then goes through a striking birch forest and then over the open fields and ends on a beautiful steep ridge overlooking KabelvӒg. In the parking lot, we encountered some women who have been on the islands for a while now and gave us some information about the conditions and snowpack. When they left, for some reason, the men started to get there shit together quickly, and we started the tour.

The tour through the birches quickly taught us the finesses of splitboarding, with some fun little Telemark descends through the greedy alders. The people that can ski are in an advantage here; the other ones are lucky to get out of this forest unscathed. In the lower parts of the ascent the snow is compact and even a little bit icy in some places in the morning. Halfway through the forest, the snow changes in good powder with lots of grip and is surprisingly pleasant for our splitboards. We were in a luxury position that we did not need any crampons for our splitboards. Upon the hill between the Varden peak and Stortinden, the situation becomes challenging without crampons, yet still to be done. 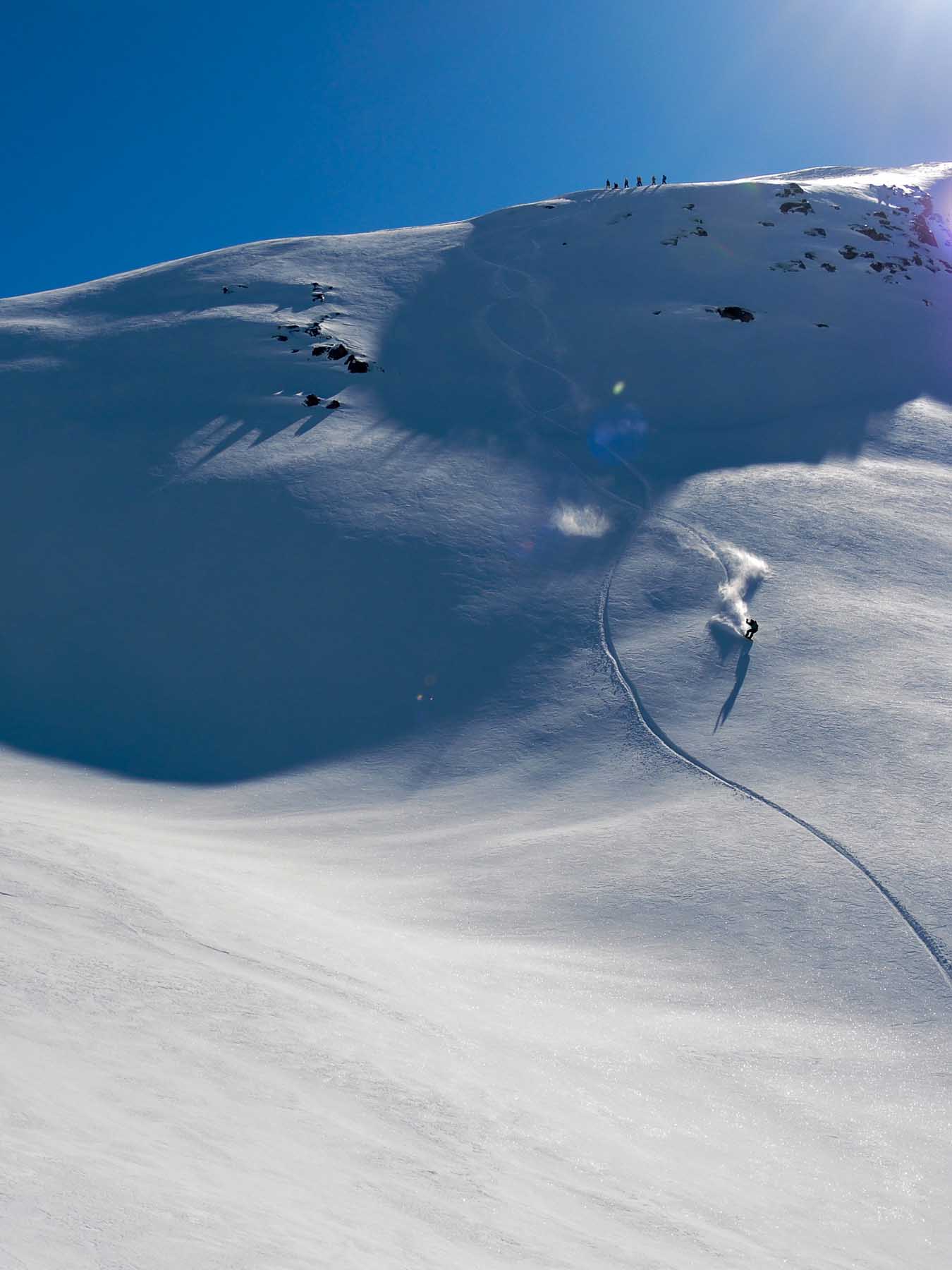 Jeroen lays down the boot pack; it's the trick to ram your boot in the snow for the necessary grip. The last few meters the view gets breathtaking, and everyone is full of adrenaline. Some participants wonder where we can descend. Jeroen led us the way into the north face, in the first few turns you can hear the ice under the powder, but the snow gets better under our feet at every turn. The rest of the virgin powder fields are incredible, and we cruise down in giant speedy turns. We make use of all the obstacles on our way down. It became clear to us that we had to bring our crampons and ice-ax for the rest of the trip to leave no peaks unmarked.

After the first tour, we encountered a German Shepherd, who is happy to get to speak to some random tourists. He tells us some stories about the beautiful local nature and moose. After that, we decided to go for some delicious Norwegian beers in the port of Henningsvaer in the climbing cafe, which unfortunately appeared to be closed. Luckily we found better luck at another terrasse.

The next day, the stoke is all-time, we found even better snow on the Breitind next to the Torskmannen. The first descent the snow sprayed even higher than the day before, and the Torskmannen is a peak for which we put on our crampons, and we cruised down on perfect spring snow. 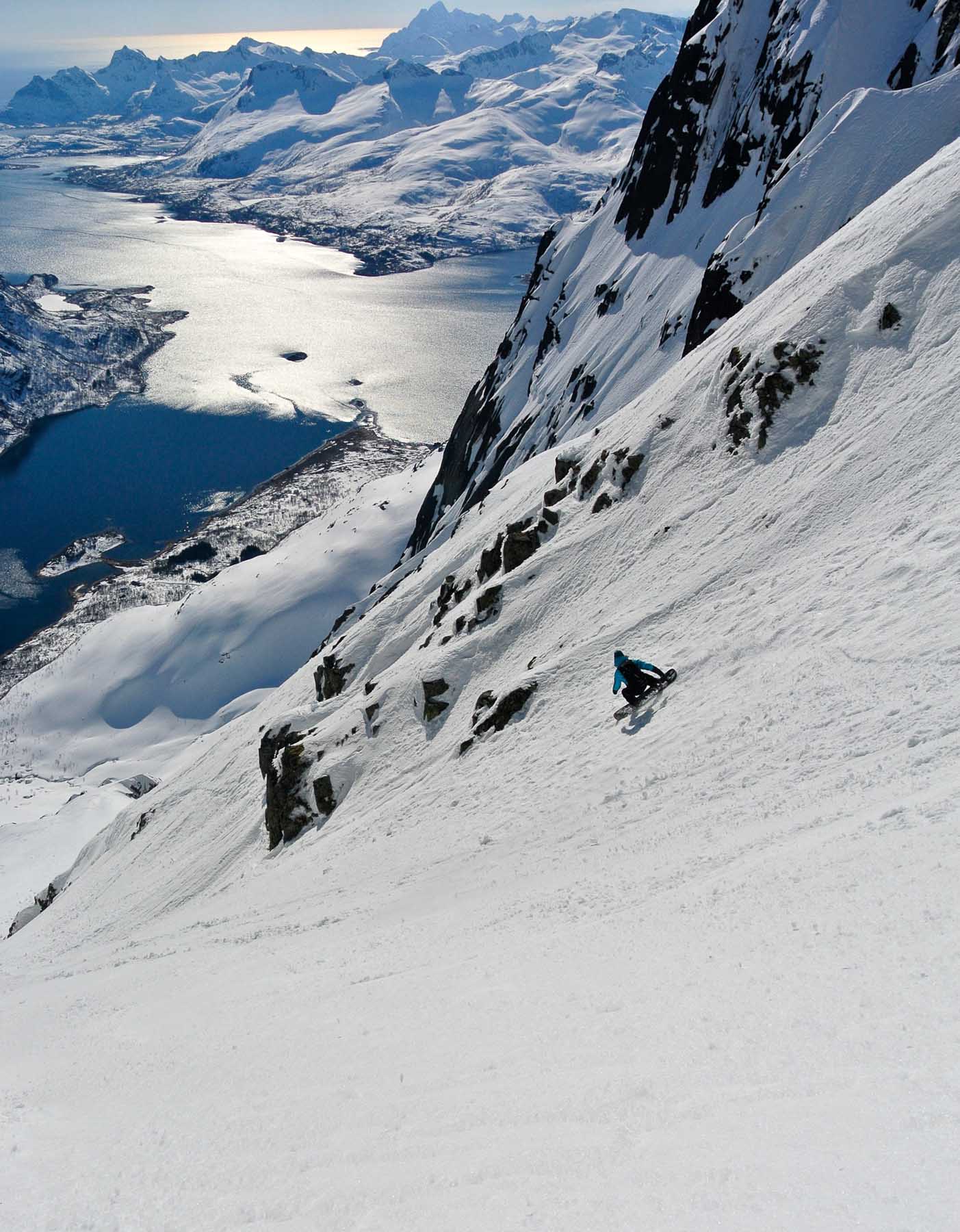 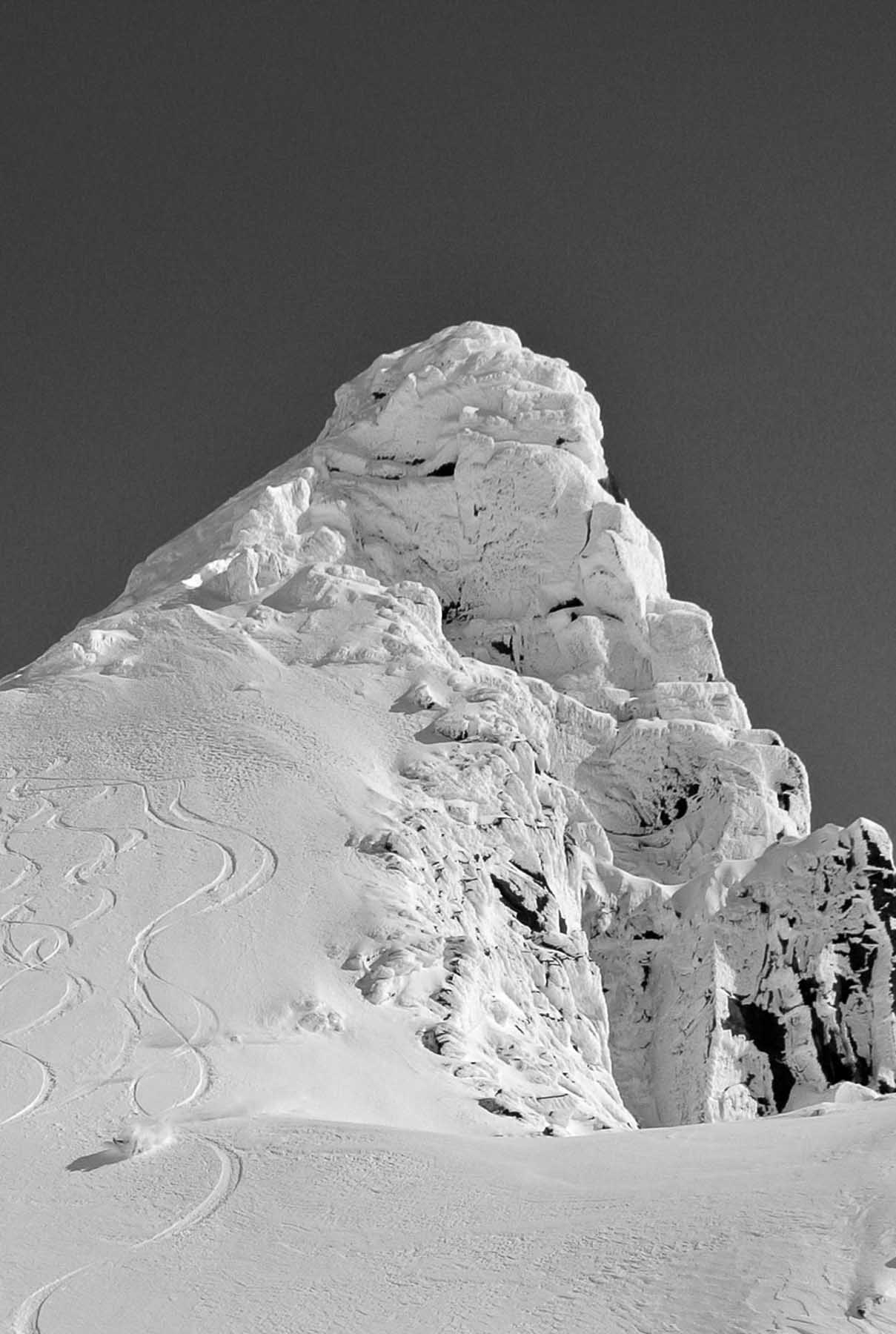 After a few days, when everybody found his rhythm and flow, we decided to climb the highlight of the week. The legendary Geitgaljetinden peak with 1080m. It is a narrow, exposed and unique peak with a steep couloir facing south. When you ride this enormous funnel down it gives you the feeling of riding down directly into the ocean. During the tour, we started using the crampons on the first icy slope. An old avalanche has taken away all the fresh snow here, and there is not much chance without crampons. Then there was mixed climbing, splitboarding, boot-packing and hiking with crampons. Eventually, after the last boot-pack we hit the peak at 3 o'clock with the phenomenal view over the Lofoten. After studying all the beautiful lines for the upcoming days, we descended through the infinite slushy couloir, with this leg burning couloir. When we came back at the port, we decided to go bouldering with the crew next to our accommodation, here we found the most epic grill place you can imagine with a view over the sea and a few islands in the distance. With enough wood to make it through the week. After this discovery, we got into the bbq flow, and we barbecued every consecutive night. Two boys even spotted Orcas from this place. The sea view, a sunset with a beautiful pink glow, makes you dream of the adventure of the next day. 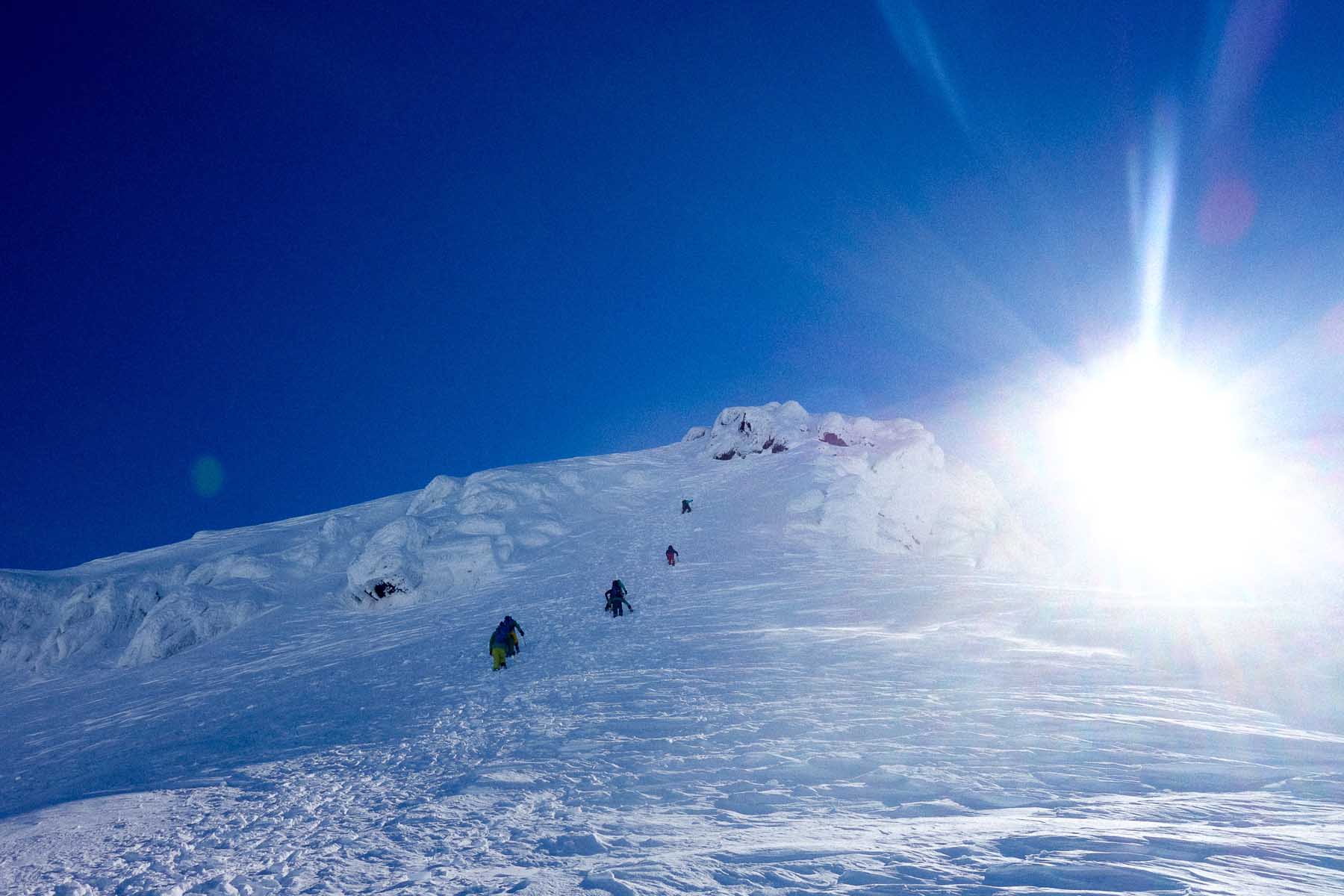 On day four we had a delicious freeride zone on the menu, on the Rundfjellet, there were some more tracks, but if you rode creatively, you could ride top to bottom in untracked powder. That's because the most tour operators here are traditional skiers and don’t have a freeride mindset. As we hiked up for about 3 hours, with a few creek crossings, we dropped in a steep north face with lines between forty and forty-five degrees steep. We rode this open spaces on the Rundfellet with the largest and fastest arcs of the week until mid-mountain. The snow deck was bouncy, smooth as butter, and offered a lot of grip and support. After the first ride, we did a few more short laps in super fun terrain with rollers, short steep pitches and lots of other obstacles. At the end of the day, we finished pretty far from our cars and hitched hiked back to our cars with a Swedish crew.

The last day is D-day, we hiked up 1300hm north of Laupstad. These were also the most unforgettable meters for many. The black humor did not stop, and we had the perfect scenario for many jokes between the Dutch and Germans. In total, we made our way through three different zones, all in all with beautiful untouched snow. The first Descent was an East facing slope with the best spring snow that you can imagine. The hike between these zones brought us over rolling terrain to a reservoir where we kept big distances from each other to stay safe on the ice. It seems like a huge arena where you could imagine that trolls are looking down on you. The last meters we then got up to Kvittind. Here we got two short couloirs through steep terrain followed by the best natural fun park of the whole trip. There are wind lips and beautiful wavy terrain to surf down. The run ends between the Alders by the sea.

After this last run, we drove euphorically to Svolvær and went for a good meal amongst the weekend crowds on the sunny terrace in our smoked grill togs, stinking like a couple of Vikings. We winded up the week knowing that the day of the return trip the weather becomes cloudy and foggy. We started to make plans for trips that we will make the year after. For the whole crew, this was amongst the best splitboard experience ever, and we realize that it's almost impossible to be so lucky with the conditions we have had. The evening ends in infinite light at an infinite bbq with some tasty wines and hot-dogs at the bonfire. What a trip, what a trip ............

You can now book this trip on our website!